What are solar cells?

Words of Inspiration from the Founder…II

What are solar cells? 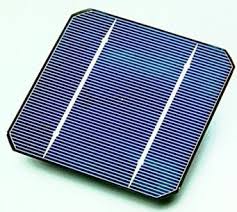 What is a solar cell?
It is a device  that takes the  sunlight energy and converts it into electric power.It normally comes embedded in a solar panel

What is it made of?

A solar cell is made up of silicon and are joined together to form a circuit.

How does  it convert sunlight energy into electric power?

The bonds between silicon atoms are shared between are made of electrons that a all of the atoms of the crystal. The light gets absorbed, and one of the electrons situated in one of the bonds gets a up to a higher energy level and can move around more freely than when it was bound. So the  electron  moves around the crystal easily, and we get a current for use.

How does a plant capture light energy in contrast with solar cells?

Plants absorb the light, and  use that electron to change a chemical bond inside the plant to make fuel.

Has  artificial photosynthesis  being done to mimic a plant?
At the moment it has not been done,but  hopefully it will be in the future.