When sunlight rays are transmitted, they are reflected by solar cells.

A lot of times, they are lost as unused energy.

However, it is intriguing and inspiring to note that a solution to that loss has been discovered through the wings of a butterfly.

Pachliopta aristolochiae(a butterfly) possess wings that are drilled by nanostructures (nanoholes) that help absorbing and store light over a wide spectrum far better than  most smooth surfaces.

Scientists &Researchers based in Karlsruhe Institute of Technology (KIT) have  succeeded in transferring these nanostructures to solar cells  thereby enhancing their light absorption rate by approximately 200 percent.

According to them,the butterfly  is a very dark black one. The colour symbolizes the fact that it can absorb sunlight for its own internal optimum heat management. 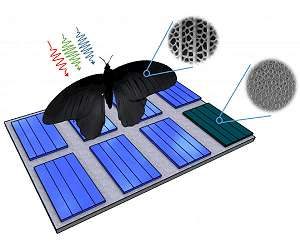 They also discovered that the disordered holes of different diameters  of the black butterfly  produced most stable absorption rates over the complete spectrum at variable angles of incidence, with respect to periodically arranged monosized nanoholes. Hence, they introduced disorderly positioned holes in a thin-film PV absorber of different diameters  from 133 to 343 nanometers.

So,they  reproduced the butterfly’s nanostructures in the silicon absorbing layer of a thin-film solar cell.

However, despite absorption rates of thin layers are below those of crystalline silicon cells they can be used in systems needing little power- such as pocket calculators or watches.Increased enhanced absorption would make thin-film cells much more attractive for larger applications, such as photovoltaics systems on roofs.

The realization of this discovery is that it will help save energy that is lost when sunlight rays is being transmitted and make solar cells super-efficient for trapping energy for electricity creation.