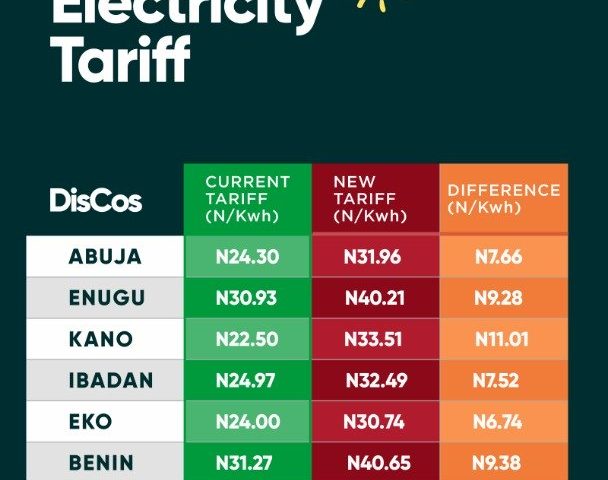 The Nigerian Electricity Regulatory Commission has recently approved increase in electricity tariff by the 11 Electricity Distribution Companies (DisCos) in the country.

News Agency of Nigeria reports the directive of the new tarriff regime for different DisCos and category of customers, was published on NERC website on Saturday.

The directive was signed by the NERC Chairman, Prof. James Momoh, and Secretary, Mr. Dafe Akpedeye.

The commission said the order super-ceded the earlier one issued on the subject matter, and the new tariff regime takes effect from January 1, 2020.

NERC noted that the order had taken into consideration other actual changes in relevant macroeconomic variables and available generation capacity as at October 31, 2019.

“Projections are made for the variables for year 2020 and beyond based on the best available information” .

The commission, however, based adjustments in the tariff, on the relevant data obtained from the Central Bank of Nigeria and National Bureau of Statistics such as average monthly inflation rate of 11.3 per cent, exchange rate of N309.97.

According to the publication, for the Abuja Electricity Distribution Company residential customers R3 that were paying N27.20 per unit are to now pay N47.09.

NERC said the customers are now to pay N19.89 more per unit representing 236.75 per cent increase.

The commission said for the Ikeja Electricity Distribution Company’s customers, the R3 category that were formerly paying N26.50 per unit is to now pay N36.92 per unit.

The customers are, therefore, to pay additional N10.02 per unit, representing 368.49 per cent increase.

“The difference is now the additional 10.03 per unit, representing an increase of 357.42 percent”.

NERC said Enugu Electricity Distribution Company residential (R3) customers that were paying N27.11 per unit in 2015 are to now pay N48.12 per unit.

The customers are to pay additional N21.01 per unit, which translates to 229.03 percent.