HOW DO SOLAR PANELS WORK? 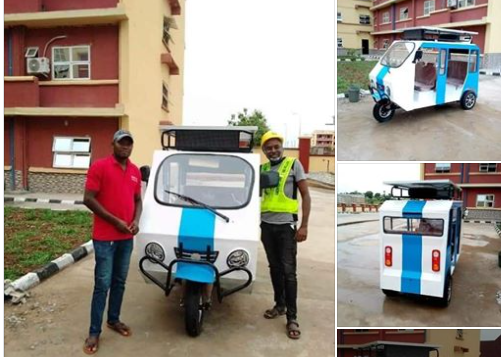 If Obinna Okafor ever gets the opportunity to meet President Buhari, he would be asking for the necessary support to make his innovation a pride of Africa – Okafor’s innovation, a solar-powered tricycle, was unveiled recently in Abakaliki, Ebonyi state – The young man wants to be known as the man spearheading electric cars in Africa like Elon Musk

Anthony Obinna Okafor is one of the many Nigerians who are not letting the challenges in the country deter them from pursuing their passion. A graduate of Mechanical/Production Engineering, Okafor who studied at the Nnamdi Azikiwe University, Awka, wants to be known as Elon Musk of Africa.

“I want to be known as the man spearheading electric cars in Africa like Elon Musk is doing with his brand Tesla,” he said.

His latest innovation is a solar-powered tricycle which he unveiled recently in Abakaliki, Ebonyi state. In a recent interview with Vanguard, Okafor disclosed that it took about three weeks to complete the solar-powered tricycle, popularly called Keke. According to him, this was due to limited working tools and machines.

He said he was supported by Ebonyi State Vocation College, noting that it wasn’t easy getting to the finished product with the greatest challenge being capital funding. Okafor admitted that materials like the electric motor, axle and controllers with few other accessories were imported. He, however, noted that such materials can be fabricated in Nigeria by him if he gets the necessary funding to commercialize this project. On how the tricycle works, Okafor said it has solar panels and can charge itself on condition of cloudy weather. He said it can also be charged with the grid or with an external solar power supply of generator.

“On a full charge, it can go 60 to 70km. And on a sunny day, the added panels will extend range by another 10km,” he added. The young man said he is still contemplating on a name for his work but at the moment, he calls the tricycle OKAFOR like Ford, Toyota, Honda, Bajaj which are names of the inventors.

He said if he has the opportunity of meeting President Muhammadu Buhari, he would ask for capita funding.