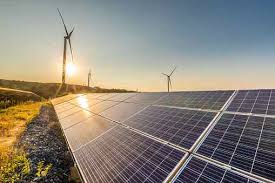 Energy resources which are replenished constantly are defined as renewable energy resources. Resources such coal or gasoline burn up and are gone, but the sun keeps shining and the wind keeps blowing no matter how many homes use them to make electricity.
There are six major types of renewable energy sources. These include: solar, wind, geothermal, bioenergy, hydropower, and hydrogen. These are also referred to as green or clean energy.
These renewable energy sources can produce alternative energy. Here are types of alternative energy and the benefits they offer
Solar Power
This energy is derived from the sun. Photovoltaic (PV) solar which uses solar cell technology to convert sunlight to alternate current is the technology used for most solar panels. The technology provides clean electricity used to power homes and businesses. In recent times, solar panels have been designed to last a lifetime and even come with warranties which could last up to twenty years.
Wind
Another very popular means of generating alternate current is wind energy. According to the U.S Department of Energy, wind energy is another fast growing means of electricity generation. Wind flow is captured by turbines and converted into electricity. Wind turbines can convert almost half of the wind that hits them into electrical power. Offshore areas from Lagos through Ondo, Delta, Rivers, Bayelsa to Akwa Ibom were reported to have good potential for wind turbines. Wind turbines can provide electricity on a large scale enough to power a community
Geothermal
These harness heat generated from the earth. Geothermal power plants are mostly located in areas near volcanos. However, plants can be located within other areas.
Biomass
Biological matter has been used for centuries to create energy. For example, the use of wood to start a fire. Bioenergy can also involve using bacteria to release gas that can generate power. Materials for bioenergy can be found everywhere and using them for this purpose often gets rid of waste in a constructive way.
Hydropower
Hydropower power generates energy from water in motion.
A dam forms a reservoir, and the water from the reservoir spins a turbine that produces electricity. The famous Kanji Dam located in Niger State, Nigeria is a plausible example.
Like hydropower, hydro-kinetic energy generates alternate current from flowing water . However, hydrokinetic power uses the motion of ocean waves and free-flowing water in rivers. Oceans cover more than 70 percent of the planet and the energy generated by all those waves can be used to spin turbines. However, hydrokinetic energy is still largely experimental and the environmental impacts on marine life remain unclear.
Hydrogen
Hydrogen is the most common element in the universe, and it has the potential to generate a lot of energy while producing no pollution. Liquid hydrogen has been used since the 1950s to launch rockets into orbit. Hydrogen fuel cells in cars and other vehicles convert the potential chemical energy of hydrogen into electricity, with water and heat as the only byproducts.
All of the renewable sources mentioned above have been developed to create a more environmentally friendly approach towards powering our world.
Here are some of the benefits renewable energy resources offer
1. Unlike fossil fuels that have a limited lifespan, renewables are providing innovative solutions to utilize resources that are readily available.
2. Renewables like bioenergy, are even taking on two environmental challenges by eliminating both greenhouse gasses and waste. These efforts paired with their increasing affordability provide more accessibility to cleaner power options, making them more commonplace.
3. Renewables generally offer a cleaner option for energy generation thereby curbing pollution. Solar technology remains one of the least polluting forms of renewable energy, as well as one of the most affordable. Solar solutions are readily available for home and business installations. To find out how to go solar call 08089982052